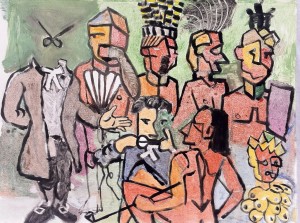 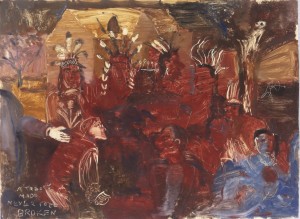 These works relate a story that every grade school child learns in the State of Pennsylvania. The works depict the 17th Century Treaty of the Three Days Walk. It was the agreement through which the Quakers, under the leadership of William Penn, agreed to live peacefully with Native American tribes in the region around what is now Philadelphia. The Quakers gained all the land that a single person could traverse on foot in three days. For more than 80 years, as long as the Quakers were a majority, there were peaceful relations between the Colonists and the local tribes.

Benjamin West, Quaker and American painter from Philadelphia created a history painting of the event. This work became the subject of engravings that were available in the US in the decades after the Revolution. Edward Hicks, a Quaker minister and sign painter, was inspired to create a series of pictures in the 1830-1840s that depicted the event. He used the engravings as the model for his image. Hicks believed that Penn’s treaty represented the founding of a peaceable kingdom, foretold in the Bible as the union of opposites, revealed in the unlikely success of the treaty and in the unusual combinations of animals–the lion and the lamb. Hicks did not see his work as art, and his paintings languished in obscurity until appreciation for folk art emerged in the early 20th century.

In my monoprints, I sought to capture the sense of representing layers of 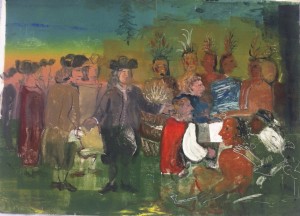 history through multiple filters of myth, modes of painting –a mash-up of historical, folk and modernist signifying systems.  The series also served as studies for a large wooden construction depicting the animals, Quaker Colonists and Native Americans, exhibited at Bridgewater Community College in New Jersey and the Art Lot in Brooklyn, but now lost.